A lot of hot air about pollution

A lot of people have said that since Hammersmith Bridge was closed, the traffic must have been diverted to Putney and Chiswick bridges, increasing pollution in those areas.

Pollution information gathered by King's College London (who can reasonably be assumed to be unbiased) is freely available online at www.londonair.org.uk/LondonAir. They provide a very useful online graphing tool to display their data.

Here is a graph showing levels of various pollutants, including airborne particulates, in Putney High Street, between 1st March and 19th May 2019 (Hammersmith Bridge was closed to motor traffic on April 10th): 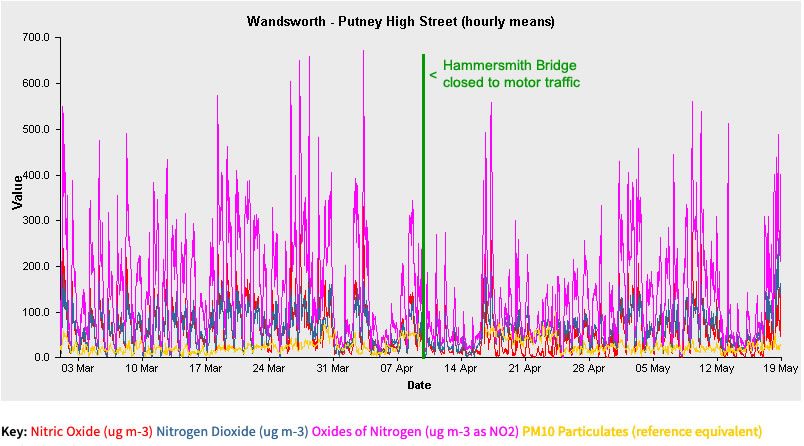 Pollution levels in Putney High Street (Click to zoom in)

This is the nearest air pollution monitor I could find to Putney Bridge.

As you can see from the graph, the level of pollution hasn't increased since Hammersmith Bridge was closed. In fact, if anything, it's gone down a little.

I couldn't find a monitor particularly close to Chiswick Bridge, but here is a graph for the same period for Chiswick itself: 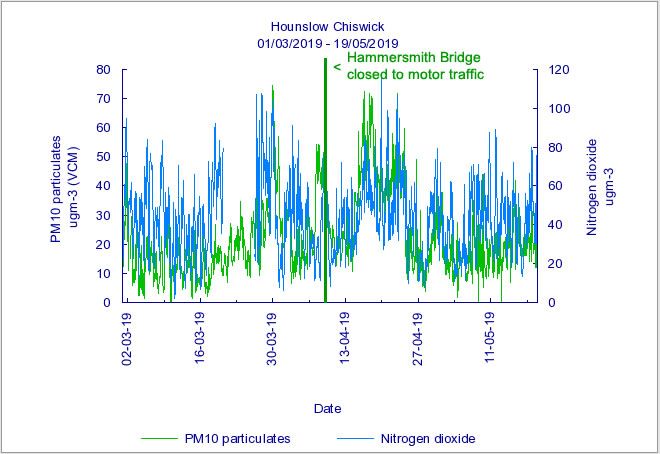 Pollution levels in Chiswick. Source: www.airqualityengland.co.uk (Click to zoom in)

It seems that there was a slight increase in pollution for a short while (though not immediately) after the bridge was closed to motor traffic, but again, it has returned to the same level as before.

And by way of comparison, here is the graph for Castelnau (the road that leads to Hammersmith Bridge, which would typically carry very long traffic jams in the mornings and evenings): 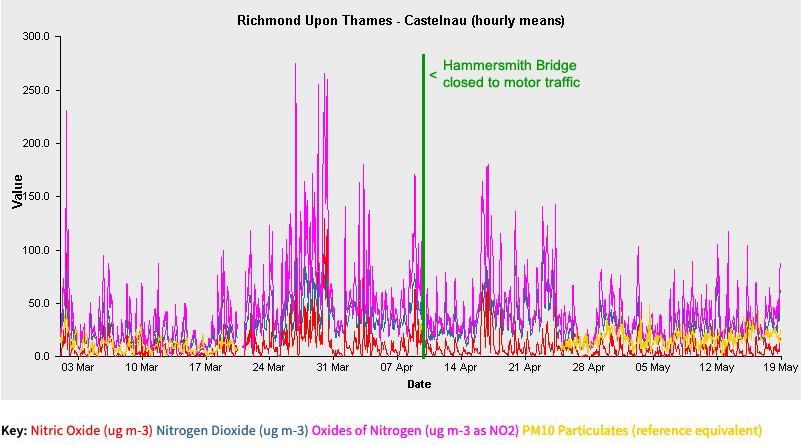 Pollution levels in Castelnau, Barnes (Click to zoom in)

As you can see, there has been a drop in the level of pollution here, as you would expect.

So the data shows that the level of pollution near Hammersmith Bridge has fallen, while there has been no increase near Putney Bridge or in Chiswick. In other words, the total pollution has decreased. Surely this is a reason to celebrate?

Well, not completely: the level of pollution in the area is still pretty high. Let's not forget that we are all breathing air that contains harmful pollutants produced by motorised traffic.

But at least the levels in the surrounding areas haven't gone up. I wonder if this will stop people claiming that pollution has been increased by the "closure"of Hammersmith Bridge? Somehow, I doubt it.