Making the best of it

Since Hammersmith Bridge was closed to traffic, the powers that be at Hammersmith & Fulham, Richmond and Transport for London haven't been sitting still. They and others have taken action, or are making plans to make the best of the situation.

TfL have made changes to the bus routes affected by the closure of the bridge. 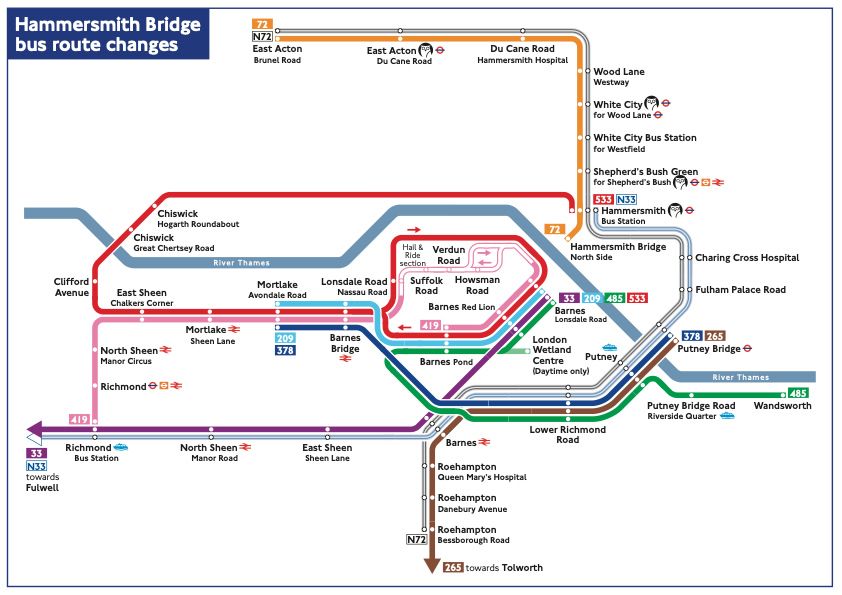 The N33 route, which runs between 1am and 5am, is diverted over Putney Bridge and doesn't serve Castelnau or Hammersmith Bridge Road.

Route 209 is rerouted to run between Mortlake and Castelnau. The route no longer serves Hammersmith bus station. The route runs along Mortlake High Street, The Terrace, Barnes High Street, Church Road and Terminates at Castelnau.

Route 419 is rerouted to run between Richmond and Barnes Pond (via Castelnau), no longer serving Hammersmith Bridge Road or Hammersmith bus station. Between Lonsdale Road (eastern end) and Barnes Pond it runs along Castelnau (serving the 'Lonsdale Road' bus stops, close to the south side of Hammersmith Bridge) and Church Road, starting and finishing at the 'Barnes Pond' bus stops in Church Road. It continues to run as previously between Richmond and Lonsdale Road (eastern end), except towards Barnes Pond it runs along Verdun Road (northern end) and Lonsdale Road, no longer serving Howsman Road and Kilmington Road in this direction.

You can comment on changes to bus routes at: https://consultations.tfl.gov.uk/buses/hammersmith-bridge/

The walk across the bridge from Hammersmith Station to the bus stops in Castelnau (or vice versa) can be quite pleasant in the daytime, but at night it can be dark and, for some, a bit unnerving.

To address this, LBHF have installed lighting along the walkways on both sides of the bridge.

One worry has been that the lack of a route across the bridge, as well as increased congestion in the area, might prevent people from reaching hospital in an emergency.

LBHF are working to allow ambulances across the bridge again. They say that ambulances will be the first type of vehicle to be allowed over the bridge, once it can be opened to any motorised vehicles at all.

However, it is interested to note that the emergency services say they don't think response times have been affected by the closure of the bridge to traffic.