At today's Prime Minister's Questions, Sarah Olney asked Boris Johnson about the plight of Barnes residents caused by the closure of Hammersmith Bridge.

Of course, Johnson avoided answering the question altogether, and instead used his answer to give publicity to Shaun Bailey, the Tory candidate for Mayour of London.

You can watch the exchange below.

Questioned @BorisJohnson about the proposed new transport charges and #hammersmithbridge. Infuriating to hear how they are using people's livelihoods as part of their political game-playing #PMQs pic.twitter.com/HTCKxiMB9D

According to Boris Johnson, Shaun Bailey will be re-opening the bridge, and has secured funding to do so(!).

Shaun Bailey was quick to jump on board...

It’s an embarrassment to our city that @SadiqKhan has let Hammersmith Bridge fall down.

As the PM, @BorisJohnson says, as Mayor, I will work with the Government to open the bridge as quickly as possible. pic.twitter.com/simA6cMzyy

Sarah Olney has followed this up by writing to Mr Bailey, asking him to confirm that funding has been arranged, and asking for a timeline for its provision. 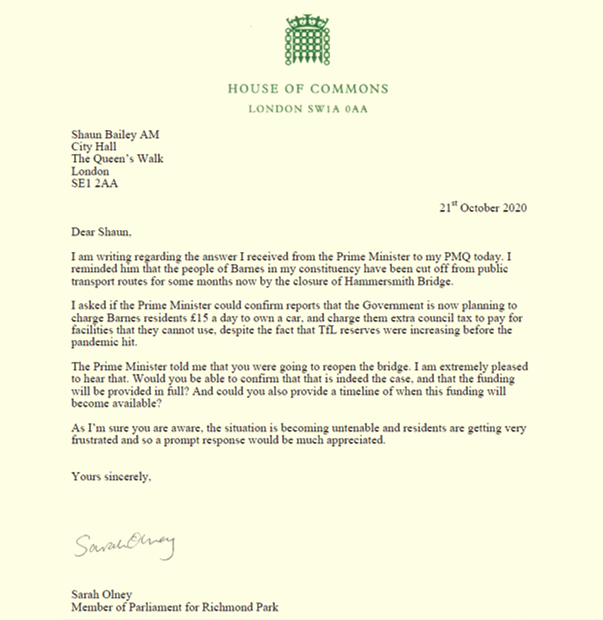 Sarah Olney's letter to Shaun Bailey (Click to zoom in)