About that ferry service 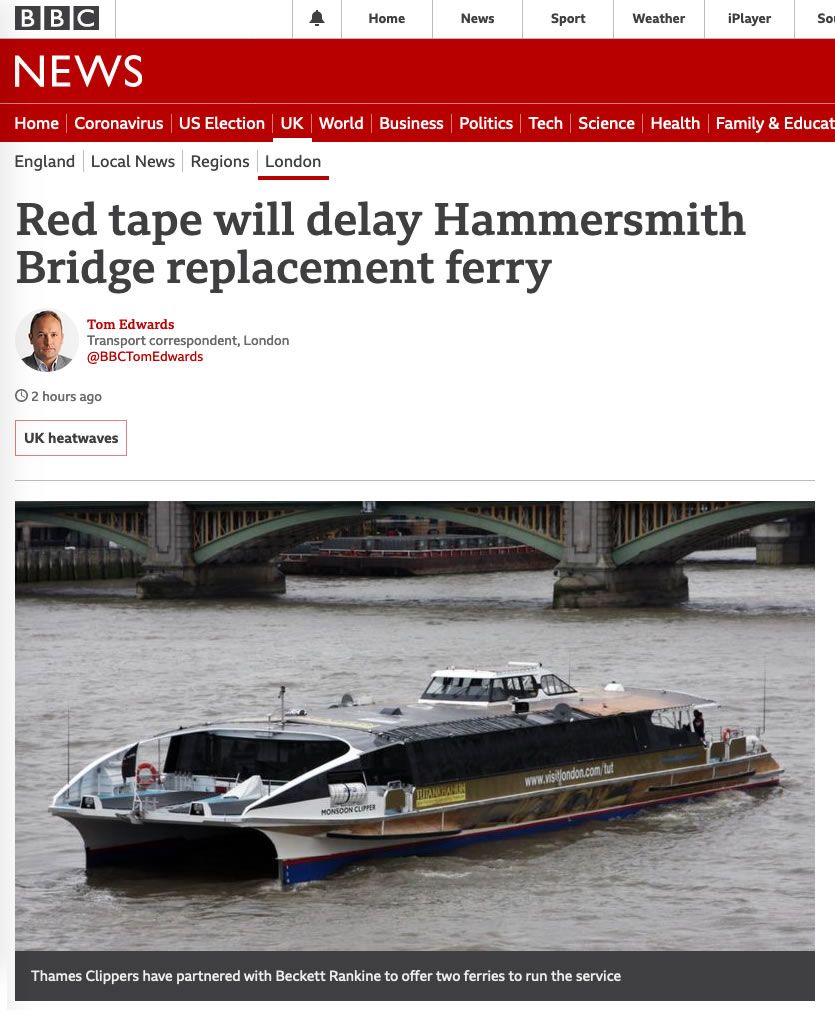 The latest statement from the Hammersmith Bridge "Taskforce" says that their preferred  solution for a temporary crossing is a ferry service. This had been agreed previously by LBHF and LBRuT.

Today, Tom Edwards of the BBC tells us that although the job has not yet gone out to tender, there have already been some unsolicited proposals to run a ferry service.

Let's bear in mind that when the bridge was only open to people on foot and on bikes, around 16,000 people a day were crossing it. Presumably a ferry service would be expected to carry numbers comparable to this, to make it worth running.

There have been suggestions for using amphibious vehicles and small boats, while Thames Clippers and Beckett Rankine, a marine engineering firm, say they can run two vessels 16 hours a day, carrying up to 1,200 people an hour in each direction.

The proposed route for the ferry would be from Queen's Wharf on the north side of the river to Riverview Gardens on the south side.

Although the tide at that part of the river has a big range - around 6m at spring tides, every two weeks - the proposal from Beckett Rankine says that pier pontoons could deal with the tidal rise and fall.

But how realistic is this idea? I know my way round a boat, and I have to say that the idea of using ferries to carry large numbers of people at this point, where the river alternates between being very wide and very narrow, and always very shallow at the sides, would be extremely difficult. 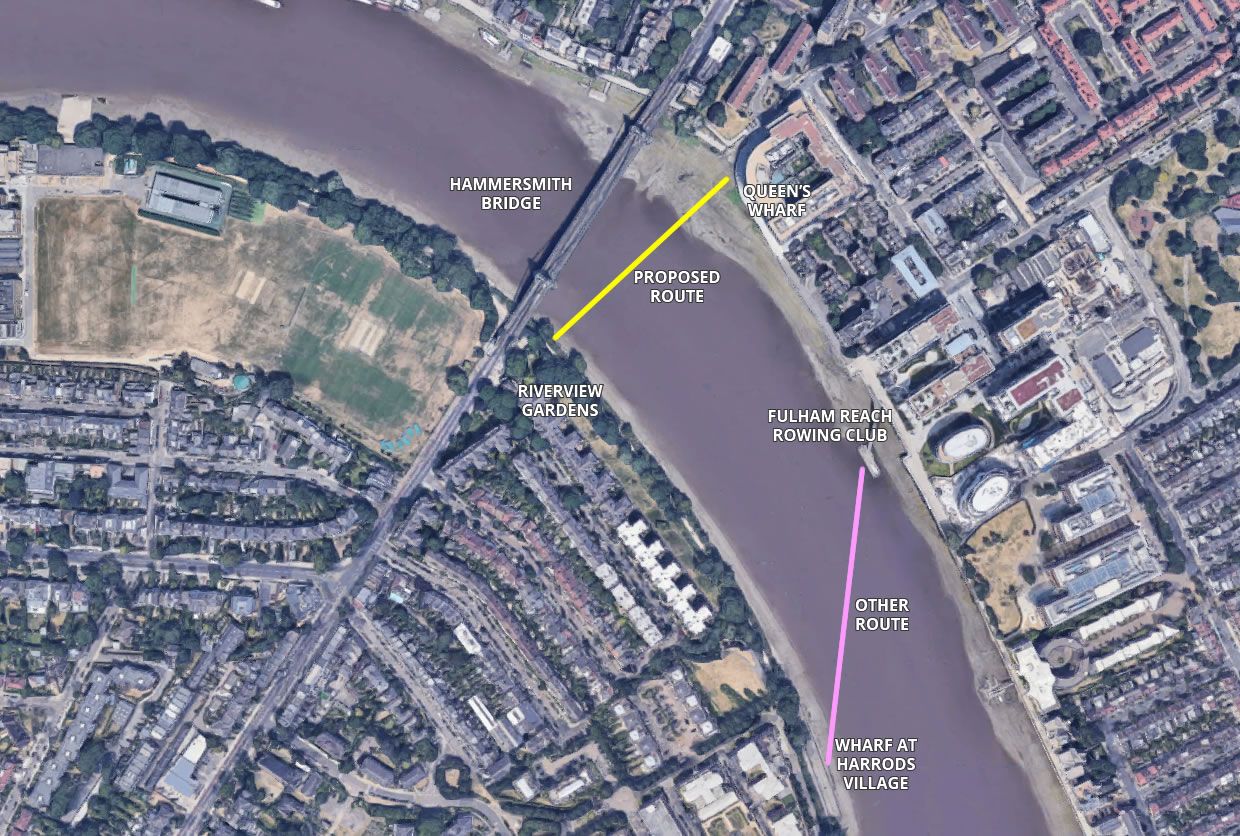 The route from Queen's Wharf to Riverview Gardens is fraught with difficulty. At each end, there are rudimentary slipways, but if large numbers of people are to be carried, then robust floating pontoons, extending some way into the river, will have to be built. Assuming the pontoons will allow ferries to operate even at the lowest tides, they will have to be quite close together. How much room will this leave for boats to manoeuvre - and how large will those boats be?

In the article linked above, the BBC have illustrated the story with a picture of the large clipper ferries that operate in central London. These boats are around 38m long and 8m wide, with a draught of around 1m. A chart of the river at Hammersmith (PDF) shows that the distance between the 1m contours on the proposed route is around 50m. So if the pier pontoons are far enough into the river to allow the ferries to operate at low tide, the distance between them will be around 50m - only 12m longer than the actual boats. This doesn't leave enough room for two large boats to manoeuvre safely between the two sides.

At the middle of each tide, the speed of the current can reach over four knots, making it difficult to dock the ferry at each end of its run. Boats usually face into the direction of the current when docking, so they would have to follow an S-shaped course to get from one side of the river to the other. Or maybe they could "ferry glide" - but the two boats would have to synchronise in the small space. And of course they would be restricted by the bridge itself, which they can't go under.

On the other hand, if smaller boats are used, will they be able to carry enough people to make it worthwhile? Thames Clippers' smaller boats are 25m long and can carry 62 passengers. To carry 1,200 people an hour, there would have to be about 20 trips, or 10 per boat. That means that each trip would have to take about six minutes, including loading and unloading. I think they're going to need a bigger boat.

I have also marked the pontoon at Fulham Reach Rowing Club and the disused wharf at Harrods Village, which have been suggested as the two ends of another possible ferry route. But again, there are problems: the disused wharf would need a lot of development, and it's a few hundred yards along a rough towpath from the road; while the pontoon on the north side is, well, a pontoon, used by a rowing club. It's not really suitable for use by thousands of people a day, and it's high and dry at low tide.

A lot of people have said that a ferry would be the quickest and easiest solution - but I think there are many problems with this idea. I'm not at all surprised that the "Taskforce" have said that it won't be in action until next year, and I'd be surprised if it ever gets going at all.

A couple more ideas that have been mentioned in online discussions:

1. Chain ferry. A chain ferry uses a chain fixed at each side of the river to haul itself from one end of its run to the other. I've assumed it's not part of the Thames Clippers proposal, because (a) they don't have any chain ferries and (b) you'd only have one vessel going backwards and forwards, rather than two. It might be the most sensible choice for a ferry, because it is held in place by the chain and so wouldn't need to do any intricate manoeuvring. But I can't see it being able to cope with thousands of people a day, and there's still the problem of providing suitable landing places at each side.

2. "Duck Buses". We've all seen the amphibious "Duck Bus" vehicles, based on wartime DUKWs, that used to carry tourists round London. They don't operate any more because their slipway was taken away from them - so why not use them here? An attractive idea, but you've still got the problems of capacity and suitable landings (though that wouldn't be impossible, since there are already two slipways in place). Oh, yes, and they used to sink or catch fire.

Here's a much more practical idea for a ferry, from The Manser Practice.