Update: The future of Hammersmith Bridge as a world-class walking & cycling link

A very interesting meeting about the future of Hammersmith Bridge was held today at the Rutland Arms on the North side of the river. 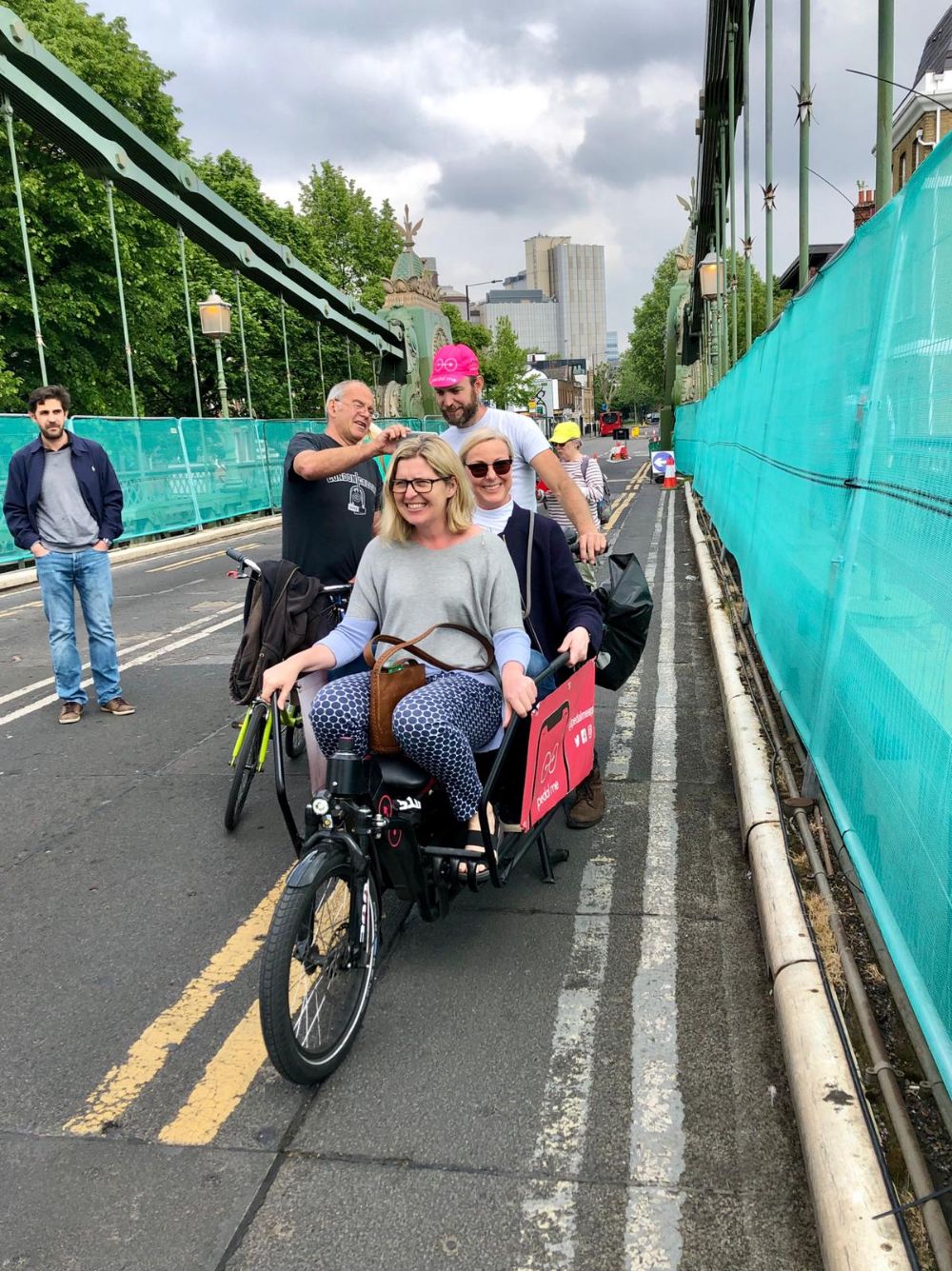 Organised by London Car Free Day, the meeting started with a walk across the bridge itself, giving us a chance to see the weakened structure up close. And for a couple of lucky people, there was the chance to try Pedal Me's electric bike service across the bridge.

The meeting then moved to the pub's function room, where there was an interesting discussion covering a wide range of views. The points I remember are:

The bridge is worn out: it is a fact that over time, metal that is kept moving (as the structure of Hammersmith Bridge is) develops internal weaknesses and simply wears out. Nothing can be done about this. The metal can't be treated and "re-strengthened". It was never designed for motor traffic in the first place, and if it is eventually reopened to cars, it won't be long before it has to be closed again.

Traffic has been displaced to other routes, causing congestion, but the current situation is the worst that it will ever be. In other words, it will improve over time, as people move to other modes of transport for their journeys.

Even if the bridge reopens to cars, it's unlikely that all the traffic will return. Before the last closure, 30,000 cars used the bridge every day; before the current one, only 20,000 were using it. In other words, 10,000 car journeys a day went away and never came back.

Cars are getting heavier. They used to weigh less than a tonne; now an average car is around 1.5 tonnes, while a Tesla (with its heavy batteries) is over two tonnes. It's a fact that the damage caused to the structure or foundations of a road is related the axle weight of the vehicle by a power of four, so if the weight of a car is doubled, it does 16 times more damage.

Pollution isn't necessarily increasing in surrounding areas. One contributor said that local politicians who claimed the bridge closure was causing extra pollution in Putney, Richmond etc, were wrong. “I checked the pollution readings and they have not risen.”

Finally: the whole point of the meeting was that the bridge is closed to cars - so what should be done with it in the 2-3 years during which it will remain closed? It would make sense to trial ideas such as planting trees and shrubs to create a garden bridge; to allow buses (or maybe a lighter "hopper" service) across the bridge; pedicab, electric bike taxis and/or rickshaws could provide transport across the bridge; there is an opportunity for pop-up businesses to trade with people walking across the bridge; and any scheme that does allow both pedestrians and bicycles to use the roadways must ensure that they are kept separate for safety.

If you were at the meeting, and feel that I have missed out any good points (or reported any wrongly) please do let me know: hello@hammersmithbridge.org.uk.